Problems with the Project RPM Genie One

Since 2008, I was using a Pro-Ject RPM Genie One, to play my vinyl records on. It was cheap for its time and quality, but there was definitely several down sides to owning one.

After the Covid-19 lockdown started, I was going out far less often (having already retired), and found the time to read stuff on the net. A new family of record decks, cheaper and based on the design of the age-old Technics DJ decks, has emerged in recent years, and the cheapest of these is the Lenco L-3808 (it’s also called the L-400. They are identical). Had I cottoned on earlier, I might have been able to take advantage of a promotion, and got one for £150, but now I was looking at £200. Still cheaper in real terms than the £175 I paid for the Pro-Ject in 2008, though. I’ve seen them new as low as £175, and second hand cheaper.

These decks are Direct Drive, which means that the motor drove the turntable either directly, or via gears. Back in the day, you had to pay serious cash to get a direct drive deck (like the aforementioned Technics) where this didn’t result in the motor noise being picked up by the stylus. Not any more, and there is no longer any real disadvantage to having Direct Drive on any but the cheapest decks, as long as the motor is good enough to run quietly and at a constant speed.

Had I bought a new L-3808, I would have had to discard the lid, as it would be impossible to get on and off on the slide-out shelf. As luck would have it, I found a shop return on E-bay where the lid had gone missing, for under £150 and that’s what I bought.

As supplied, the deck had a number of features listed here:

There are things it doesn’t have which you do get on similar but slightly dearer decks such as the Audio-Technica LP120 decks:

In terms of the sound you get from the unmodified deck, it’s pretty good but with room for improvement. One thing that is common to this type of deck is the felt so-called “slipmat”. It’s all very well if you’re a DJ, but for hi-fi domestic use, you can do better, without paying a great deal. I did find some of the other DJ features useful though. The strobe light, coupled with the speed slider, allows you to correct any slight speed inaccuracies. The small lamp helps you to position the tonearm correctly before lowering it, without having to switch on the room lighting. And the direct drive mechanism gets the turntable up to speed very quickly.

When I bought my amplifier (an all-in-one Cambridge Audio One), I’d already had to buy an RIAA phono pre-amp for it. It was a cheap one, the Behringer PP400. It’s not bad, but not great. With the L-3808, there was a small difference in sound quality between using the deck in “phono” mode and inserting the pre-amp, and using the deck in “line” mode and plugging it straight to the amp. The extra pre-amp was slightly better in that sibilants in vocals were handled slightly better, but having heard CDs and Digitised Music through the Cambridge unit, I felt that I could do better.

On the other hand, the presence of the Anti-skate control meant that there were fewer jumps compared to my old Pro-Ject, and less background distortion resulting from the needle pushing against the inside of the groove. I have to say that this omission was corrected on later versions of the Pro-Ject RPM Genie.

Overall I have to say that this type of deck will sound much better than the cheap all in one stuff, but it’s at a price point where you have to spend a lot more to get small improvements. With a few modifications, you can push it up a further couple of notches. I’ve made a few mods, and my deck’s sound now has the fullness of CDs and Digitised music played through the same amplifier. I’ve written about some of the things to try in another post. 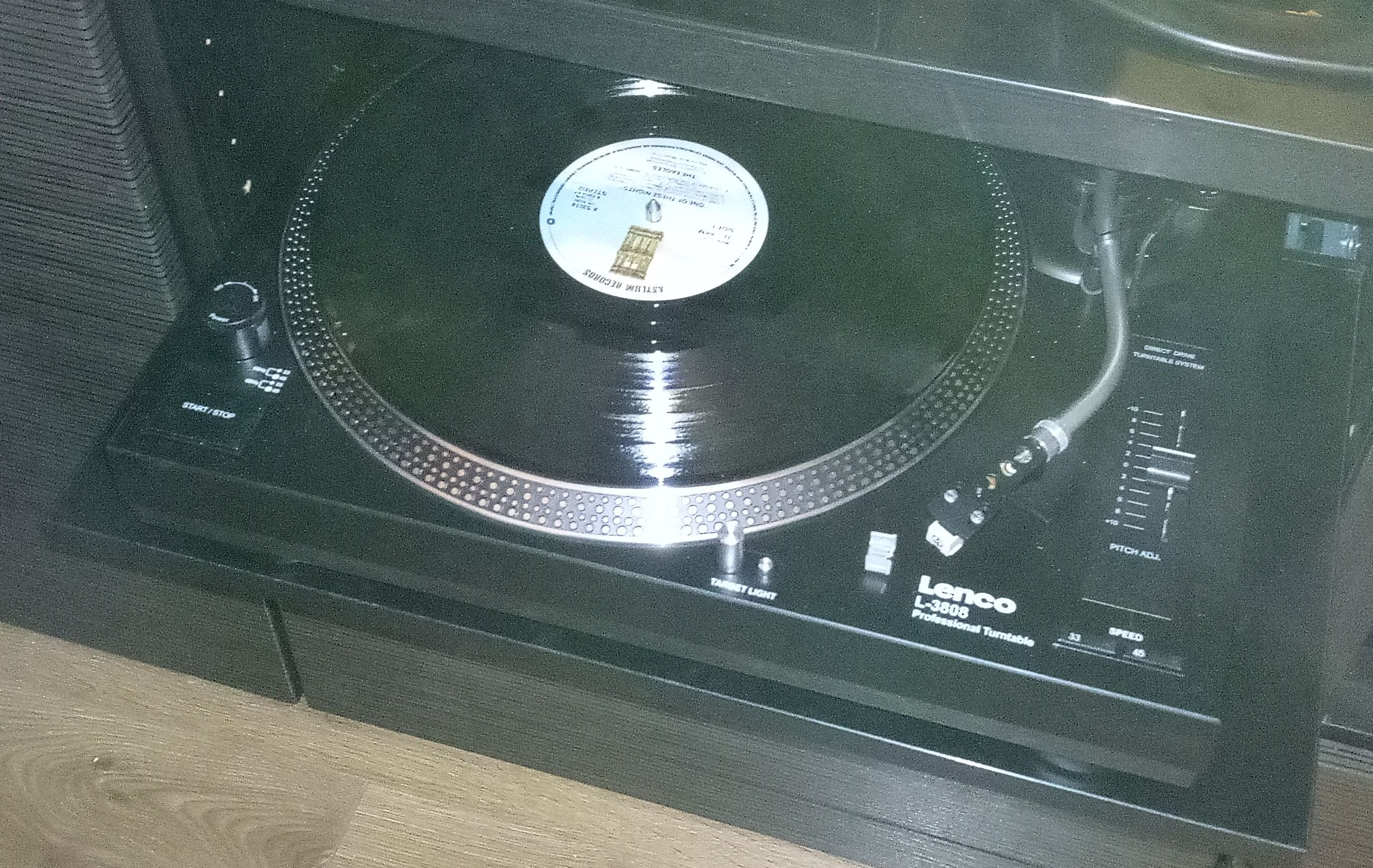 My Lenco L-3808 record deck on its shelf. (Before I adjusted the Cartridge Position — see below!)

Setting Up the Deck

Firstly, make sure that your record deck is level. The L-3808 has adjustable feet. Although I couldn’t access the rear ones on the slide-out shelf, I was able to get the deck perfectly level with the front ones. The shelf it sits on tilts forward by a tiny amount. It was just a question of turning the front feet clockwise to compensate. Using a small spirit level, (small enough to fit on the turntable platter itself), I placed it pointing left and right, and front to back, whilst I made adjustments. When I thought I had it right, I placed it diagonally on the platter, along the line that the arm swings through. It was perfect. Check the video just ahead but bear in mind that you have adjustable feet on the L-3808.

Secondly, you need to get your cartridge and stylus to the correct tracking weight and angle. I’ve found that with this deck, that the AT9600 and AT95E cartridges need to be screwed into to the head as far back as they will go (towards the pivot) to get the angle right. Anyway don’t take my word for it. This video illustrates how to set up your cartridge perfectly. Levelling is at 1:44, Tracking Weight at 4:10, Anti-Skate at 8:40 and Align Cartridge at 12:05.

Finally, make sure your cartridge is level. You don’t want the needle coming down onto the record at anything but a perfect right angle (as viewed from the front). You can get a bit of clear plastic for a few quid, as illustrated here. To avoid damage to anything, place the stylus on a stationary record, preferably an old one, and place this item in front of it, very gently.

You will be able to see whether the cartridge is straight. If it’s not, you might have to adjust the screws holding it in, or maybe twist the tonearm a tiny bit. There is a little bit of give and it can be carefully bent into the right position. Let’s hope you don’t get a bum setting, eh?

Next: Hacking the Lenco L-3808 turntable